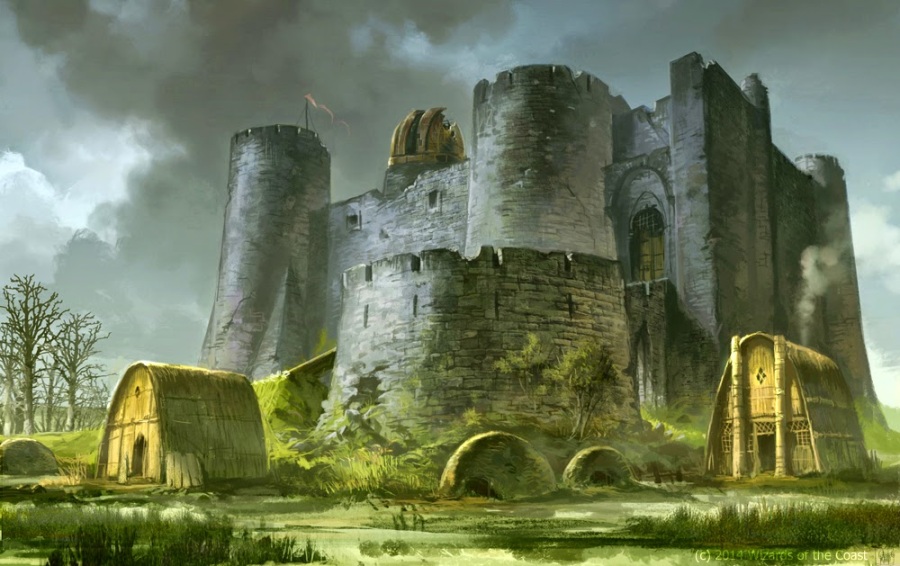 So this week  our characters walked into a grinder dungeon crawl of Hoard of the Dragon Queen, Castle Naerytar out in the swamp. This chapter has tons of enemies and adversaries, level upon level of rooms and doors, overly complex design, and unclear and badly-written descriptions–all-in-all, a potential death trap…

…and we walked through all of it with barely a scratch.

Charisma (Deception) and roleplaying came through again this session as our characters donned their stolen Cultist robes and walked into the camp like they belonged. No one was really the wiser and no one deeply questioned the presence of a few extra people. We stayed long enough to question and kill the Red Wizard and get ambushed by gargoyles as we explored the Farseer of Illusk.

When I ran this chapter previously, the characters at the time had some problems staying innocuous. They retreated several times and the castle was put on high alert. Eventually the characters got into the basement and through the portal, but not without significant ruckus left behind. I would assume that character that do not quietly flee through the portal would have pursuit close on their heels.

Our characters did the opposite. We were mindful not to overstay our welcome–meaning we did not get caught exploring too much and just aimed to get things done: look for a high-ranking Cultist, interrogate them, get out. We triggered an ambush searching for clues and we did get into one unnecessary combat, but we initiated the slaughter of the bullywug Pharblex and his minions on our own after they willingly told us what we needed to know. Then we set a panic and ran through the portal.

I was looking forward to more combat and tactics this session, but that did not materialize. It was also not nearly as fun as last session with our wacky antics. Perhaps we were too cautious–not enough decisive action and loss of cohesive leadership may be to blame for things falling a bit flat. We were not magnificent.

This session was the first time I got to use booming blade with Velkyn–specifically adding the extra thunder damage on a hit. Because of an magic item upgrade last session, Velkyn now deals 1d6 + 7 slashing plus 1d8 thunder damage when casting booming blade. Add in spiritual weapon as a bonus action every round for 1d8 + 3 force damage. I also got to maximize the secondary effect of booming blade using Destructive Wrath when the gargoyle had to move. We are leveling up to 7th heading into the next chapter, which I think is one level higher than what the book indicates.

There is an issue here. Because of the pace in which we are moving through and levelling up, a lot of things we might have explored about the characters are not happening in play. We have some time to flesh out personalities and quirks to an extent on an individual level, through interaction, but without the overall feel for the party. No one knows what fits where, so sometimes we just defer around the table. This goes for both interaction and combat, since no one has an idea of what the characters can do in the game. Four of the five regular party members are full spellcasters, which means coordinating spells might be a good tactic instead of everyone taking counterspell. One of the regular players has not been in combat with his character since 1st level!

(Side note: I realize I am being quite analytical and critical of this campaign, but I am doing it for the sake of my own thoughts and pouring the results into making alterations to my own DMing ability in the future. Also, I know what I like and what I dislike, so I believe it is better to voice my opinions here rather than discourage the DM.)